Steve first appeared at a Monday night practice in Bampton in 2001.  He was in the RAF at Brize Norton and looking for a local tower at which to ring.  It very quickly became clear, (as ringers have observed since his untimely death) that he was a ‘top bloke’.

He was an extremely accomplished bellringer:  a great asset in any tower and very free with his help and advice to those ringers less able.  Always cheerful and happy, with a zany sense of humour, he not only threw himself into the doings of the Bampton ringers, but also many of the other towers in the Witney and Woodstock Branch of the Oxfordshire Diocesan Guild of Church Bellringers.  In fact he was the branch Ringing Master for three years, from 2003-2005 inclusive.

At that time Bampton and Clanfield ringers were going on outings around the country a couple of times of year, several of which were organised by Steve.  Much to the envy of everyone else, he would always arrive at the start of an outing with a large cup of Costa coffee he had magicked from somewhere, even when we were out in the wilds. And if any of the rings were in a town that had a Wetherspoons, somehow he manage to visit it for a quick one!

In 2003, when he was also Ringing Master of the RAF Guild, he even arranged for a team from Bampton to ring at St. Clement Danes (the Oranges and Lemons church) for the RAF’s Annual Service.

In Bampton tower he was affectionately known as ‘The Witney Weaver’.  At the time there was a local bus service of that name, and if Steve wanted to have a drink after practice or at our annual dinner, he would either cycle over or catch this little bus.  It’s timetable didn’t always fit too well with the ringing one!

In 2007 he was in the team that rang the first full peal on the refurbished Bampton bells after the lengthy restoration, but sadly it was also the year he retired from the RAF and left us to go back to his home in Cornwall.  A few years later he relocated to his home county of Essex to be nearer his parents and also to marry, something he had always told us he would never do!  We made him a farewell presentation at our Annual Dinner that year.

Steve had fought off cancer in his mid-thirties, but wasn’t able to on its return.

A commemorative half muffled quarter peal of Grandsire Triples was rung on Bampton’s bells on the evening of Tuesday 4th September, and many other quarters and full peals have been rung in memoriam on very many towers all around the country.  Most have been followed by a visit to a local hostelry to toast Steve and reminisce and laugh about all his antics! 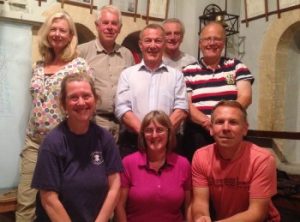