The Guild Eight Bell Striking Competition for 2009 was held at Great Tew on the 4th May 2009. Eleven bands entered this year and were split into two heats. One was held at Banbury and the other at Adderbury where the W&W Branch team rang (picture).

The method rung by each team was a specified touch of Grandsire Triples; Brian called this particular touch, which was not easy, and we were pleased to complete the touch successfully. However we were in competition with some of the best teams in the Guild and so we were not one of the six teams that won through to the final (Richard wasn’t able to fix it with his brother John who was judging this heat!). 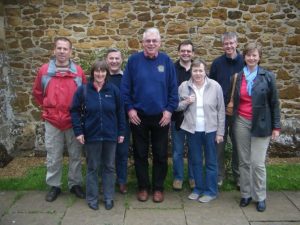